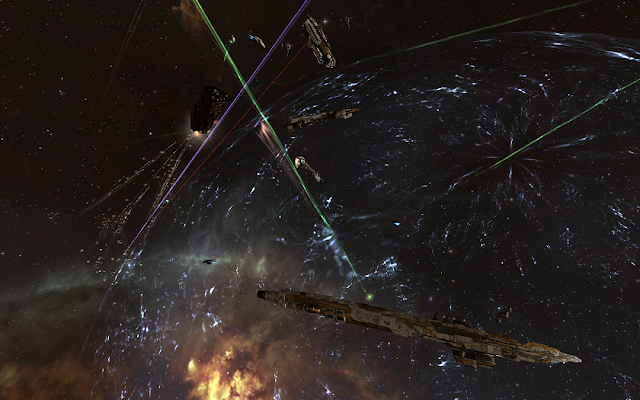 D-GTMI system, Providence region. On the 11th of July at 22:00 EVE Standard Time, forces belonging to Phoebe Freeport Republic [PFR] and Providence Bloc clashed in the system over a Sovereignty Blockade Unit.

The fight began as an event for [PFR]'s academy, which was celebrating a graduation cycle and wished to fight Providence Bloc, choosing an Amarrian motif for its fleet. 57 pilots assembled in an array of Amrrian ships, with 3 Triage Archon Carriers and a Fenrir Freighter filled with spirits. The fleet made its way from the 4-CM8I system in Scalding Pass to the D-GTMI system in Providence without an incident. The Fleet Commander for [PFR] attempted to arrange a fight with Providence Bloc, but was ignored and subsequently banned from the diplomacy channel of Providence Bloc by moderators. Attempts by other fleets members resulted in the same pattern. This caused the [PFR] fleet to attempt and draw Providence Bloc's attention in another way. Since D-GTMI had defensive Sovereignty Blockade Units already present in the system, the [PFR] fleet decided to shoot the station, hoping to alert Providence Bloc and cause it to form.

After a while though, with no apparent response, the [PFR] fleet moved to the Sovereignty Blockade Units on the T-RPFU gate and started applying damage to it, hoping to at least have a killmail out of it. However, by this time Providence Bloc had already formed, a 60 pilot mixed Cerberus Heavy Assault Cruiser and Caracal Cruiser fleet. The force quickly made its why towards the system, swelling its ranks as it burned forwards.

The two sides fought for a while, the [PFR] fleet completely outgunned and out ranged by the kitting Cruisers, who ripped apart the Amarrian ships with their missile salvos. Even with the prevalence of Triage Carriers on the field, the damage proved too great. Another factor that went against the [PFR] fleet was the Providence Bloc Stealth Bomber wing, which accompanied the main fleet and carried bombing runs on the [PFR] fleet.

The Fighting over the FSW-3C Gate

With most of their sub-capital support gone, the Providence Bloc fleet went to work on the [PFR] Carriers, taking down the cynosural field mobile inhibitor and bringing their own Capitals into the system. One after the other, the [PFR] Carriers were destroyed, the entire [PFR] fleet decimated.
With no more hostiles left to fight, the Providence Bloc fleet returned to its staging system, having secured the system once more.

Battle report for the D-GTMI system can be found here.

The Battle lasted 40 minutes, with local seeing around 200 pilots at the height of the battle and Time Dilation not reported as a major issue.

[PFR] lost nearly the entirety of its fleet, 58 ships including 3 Triage Carriers and a Freighter, for a total of 12.63Bil ISK damage. Providence Bloc losses were only 12 ships, mostly Stealth Bombers and Interdictors totaling at 600Mil ISK damage.

It seems both sides managed to achieve their objectives, with Providence Bloc defending its sovereignty while [PFR] getting the fight it wanted, though not in the format it wished for.

With FozzieSov around the corner and the so-called impending invasion of the Imperium to the region, this may have been the last "fun" big fight in the region for the near future.